So I had a look at the FT’s coverage of the inflation report, and it brought up one of my pet peeves about the commentary on the crisis, namely, measures of economic slack.

The bank of England apparently thinks that there is around 1.5% of slack in the economy. My first pet hate is that “slack” is not adequately defined in this context. Does this mean that Carney thinks that RGDP will develop a new trend line that is only 1.5% higher than the current level and at around 2% a year? Or does this simply mean that at the current moment companies estimate that with their current personnel and facilities they could only increase production by 1.5%.

This is important because there are two types of “slack”, there is the measure of “could we do more right now”, and there is the measure “given greater demand could I deploy more employees, capital, and technology to increase supply”. I am pretty sure the BOE’s estimate is about the former, but the macroeconomically important version  is the latter. In other words, the supply side constraints could be soft for a while, if technological improvements since 2008 have enabled greater production, but they just haven’t been deployed due to weak demand.

Lets take a quick look at the RGDP (constant prices): 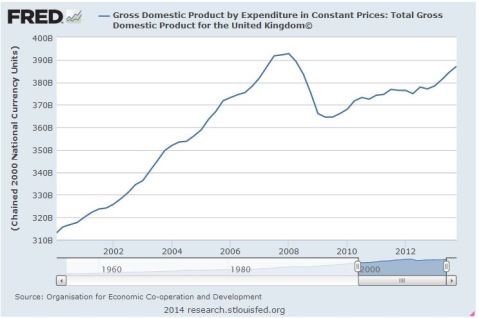 Does this look like an economy with only 1.5% slack? Is it not possible that in the medium term we might recover nearly all of our lost productivity? Might we not find that as demand grows aggregate supply just continues to quietly grow so that the BOE’s measure remains stuck at 1.5% while GDP grows 4-5% a year for a number of years?

Stolen from an ONS publication, does this look like an economy with only 1.5% slack? Are you telling me that after 7 years of technological progress, the BOE expects slack in GDP to be exhausted before productivity per worker has even reached its 2007 high?

Are we really to expect that some (minor) institutional differences will mean that UK workers will not, over the medium term, enjoy the same advances that have allowed US productivity to grow 20% in the same period? The UK is structurally similar to the US, but the structural differences (might) mean that in the UK we get more hiring first, and productivity growth later, and in the US they get more productivity first, and then more hiring. That certainly seems more plausible to me  than that the differences in our institutions mean that the UK will not benefit from the same advances of the US in the long run. In that case, the technology exists already for a 20% rise in productivity in UK workers.

The real problem here is that the BOE is giving a short term definition of slack, where it doesn’t assume anything about the future investment and employment and capital improvement programs of enterprises. It just asks about capacity utilisation right now. Which, immediately following a recession, is a sensible enough thing to do. The problem is, that here we have moved into the medium term. There has been technological progress in that time, and the fact that this is waiting in the wings means that we should not regard current utilisation as in anyway a meaningful indicator of “slack”.

I predict that productivity per worker will recover its century long trend line of 2% a year growth. In that case, “slack” in the economy is more like 15% than 1.5%. Capital spending, training workers on new technology, the rise of robotics and machine learning will do the heavy lifting over the next 3-5 years, and we can expect strong growth along side benign inflation until we approach this productivity trend line.